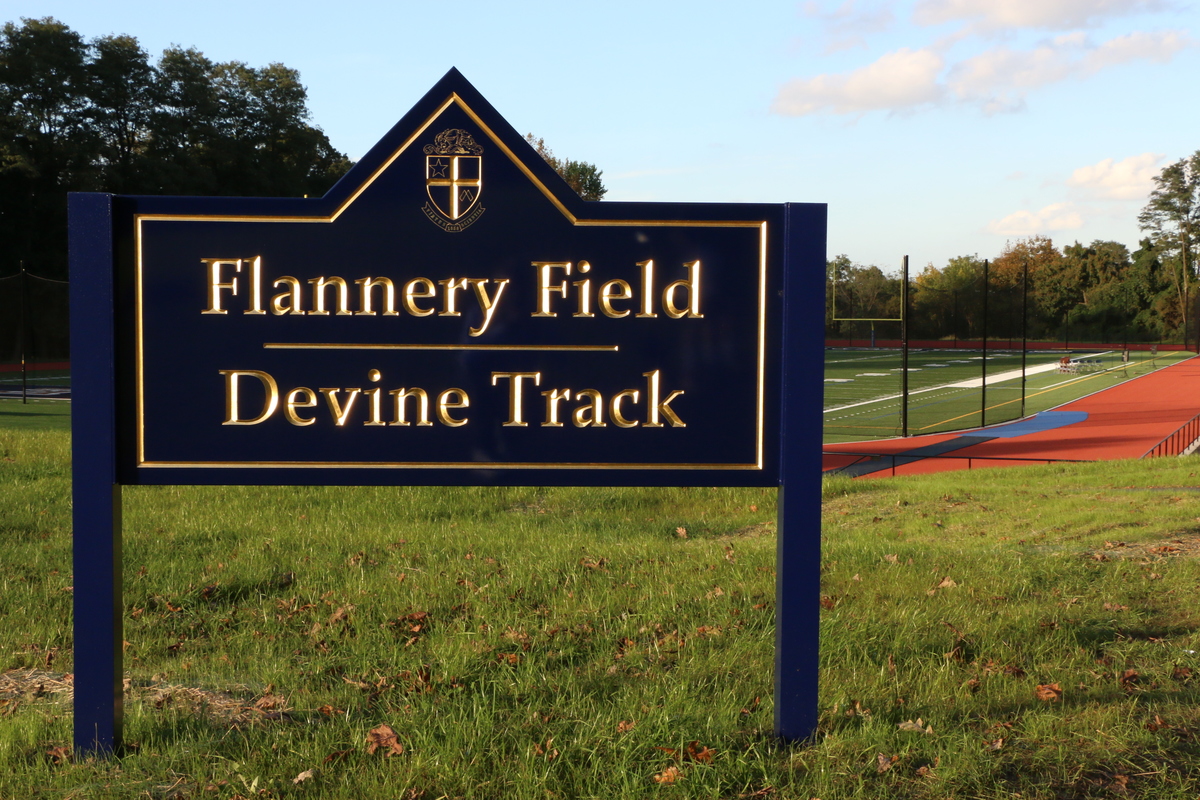 On Wednesday evening 10 October 2018, alumni, parents, past parents, faculty and friends of La Salle gathered with the Board of Trustees, student leaders, and musicians for the dedication of the renovated Flannery Field and the newly named Devine Track.

La Salle's new board chair Mr. Joseph Hartnett, '69 spoke at the ceremony and paid tribute to his immediate predecessors Bob Moran, '69 and Ben Ventresca, '70 for their vision and work in bringing this project to fruition. Brother President James Butler, FSC presided over the prayer service which included the blessing of the field, a ceremonial cutting of the ribbon by representatives of the Board, student leadership, and the two families honored in these proceedings, ending with a spirited rendition of the alma mater accompanied by the pep band.

Flannery Field is named in honor of the late John "Tex" Flannery. '40 who was head coach of La Salle varsity football for decades. His daughters Mary and Kate and grandson Dan Connors, '07 were in attendance. Devine Track was christened to honor Pat Devine, coach of La Salle's cross country and track teams for 39 years and a long-time religion teacher and guidance counselor. His wife Patti, sons David, '90 and Brian, '90, and grandchildren joined him from Portland, OR where they all reside.

The 3.75 million dollar renovation of Flannery Field and Devine track is the last project undertaken with funds provided by the "For The Future, For La Salle" campaign. La Salle is very appreciative of all the donors who contributed to the full funding of the first turf field, the Glaser Student Center, Flannery Field, and Devine Track, the signature projects supported by that 12 million dollar effort.

La Salle is especially grateful to alumnus and Hall of Fame member David Ott, '81 who was the lead donor sponsoring the effort to rename the track in honor of Coach Devine, and Miller Brothers Electric (alumni brothers Harry Miller, '83 and Michael Miller, '85) who completely underwrote the state-of-the-art lights installed on the field, making night games a possibility on campus for the first time in La Salle's history.