Blessing and Dedication of the Glaser Center 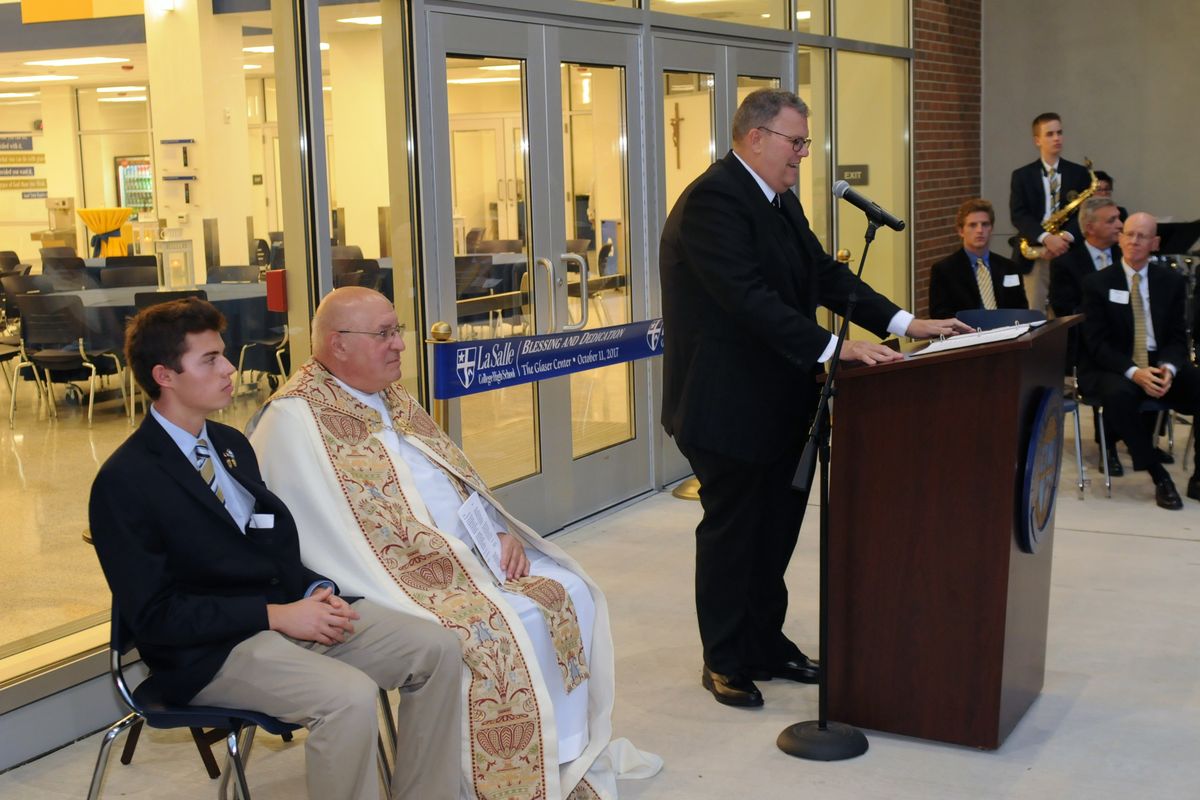 Over 250 alumni, parents, benefactors, and invited guests took part in the formal blessing and dedication of the Glaser Center on Wednesday evening, October 11, 2017.

Share to FacebookShare to TwitterShare to LinkedInShare to PinterestShare to EmailPrint this page
CarabelloC@LSCHS.ORG
Oct 13 2017 1:22 PM

Over 250 alumni, parents, benefactors, and invited guests took part in the formal blessing and dedication of the Glaser Center on Wednesday evening, October 11, 2017. Following the singing of the Magnificat by the Belcrofters, the school's advanced choral ensemble, Brother James Butler, FSC welcomed those in attendance and provided some remarks.The event continued with the Blessing of the Doors by Rev. Msgr. Charles Vance, Pastor at Saint Philip Neri Church in Lafayette Hill, along with a formal ribbon cutting ceremony which included Fanfare from ten students playing trumpets on the stairs overlooking the festivities. Msgr. Vance then blessed the interior of the new building. The ceremony concluded with remarks from Robert Moran '69, Chair of the Board of Trustees, and the singing of the Alma Mater.

In his remarks, Brother James Butler, FSC noted, "Let us never forget that a construction project leaves us with a but a pile of brick, a curtain wall of glass and aluminum, terrazzo and concrete under our feet, and Armstrong ceiling tile above. Let us always remember that it is through God's grace, dispensed imperceptibly each day and freely today, that these elements come together to create a school, not just a a space where the traditional disciplines or 21st century skills are handed down, but a Lasallian school where human relationships both illuminate and are illuminated by God's holy presence, creating wisdom from the building blocks of knowledge, compassion out of what began as sensitivity, brotherhood out of of what would otherwise be only an ephemeral friendship."

The evening continued with a reception in the Dining Hall where guests were treated to music by a Jazz Combo along with a 21-student String Ensemble. In addition, guests were able to experience the Servery and sample a variety of food offerings. The event provided many of the nearly 500 donors to the project an opportunity to see first-hand the splendor of the new Glaser Center.

The Glaser Center is a 15,344 square foot addition and renovation to the original cafeteria that opened in September of 2017 as a dining hall and student assembly space. The outside area adjacent to the building, which replaces the former "Pit," has a sport court and was designed to host events. The building is named in honor of John E. Glaser '58, who is the single largest individual benefactor at the school and whose bequest made the space possible. John Glaser's sister, Mary Barchman, was part of the ribbon cutting ceremony.