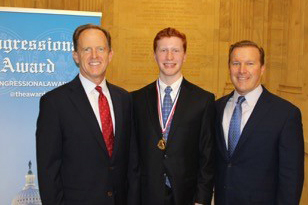 The Congressional Award Gold Medal is awarded for outstanding civic volunteerism and is the highest honor awarded to youth ages 14-24 by the United States Congress.

Share to FacebookShare to TwitterShare to LinkedInShare to PinterestShare to EmailPrint this page
CarabelloC@LSCHS.ORG
Jul 9 2018 1:50 PM

Matt Hladczuk '20 was awarded the United States Congressional Award Gold Medal on June 21, 2018. The ceremony took place in the Russell Senate Office Building in the Kennedy Caucus Room, a room of historical significance in our country. Named for Senators John F. Kennedy, Robert F. Kennedy and Edward M. Kennedy, there have been many important Senate investigations in the Kennedy Caucus Room including the sinking of the Titanic, the Teapot Dome scandal, Pearl Harbor, Army vs. McCarthy, the Vietnam War, and Watergate.

The Congressional Award Gold Medal is awarded for outstanding civic volunteerism. It is the highest honor awarded to youth ages 14-24 by the United States Congress. The Congressional Gold Medal recognizes initiative and commitment to public service. Each participant must spend two years or more completing at least 400 hours of community service, 200 hours of both personal development and physical fitness activities, and a four-night Expedition or Exploration. For this achievement, Gold Medalists are recognized at the U.S. Capitol by their Member of Congress with the presentation of The Congressional Award Gold Medal, a medal struck by the United States Mint. Matt received his medal from Pennsylvania Senator Pat Toomey.

Matt also had the honor of accompanying Congressman Brendan Boyle onto the field for the Washington Nationals vs. Philadelphia Phillies baseball game the following evening. Congressman Boyle threw out the first pitch of the game.