La Salle College High School, a Catholic, independent, college preparatory school for young men of varied backgrounds, is conducted in the tradition of St. John Baptist de La Salle. Through a broad and balanced, human and Christian education, La Salle College High School guides each student in the development of his unique God-given talents and fosters a commitment to academic excellence, service, and leadership. 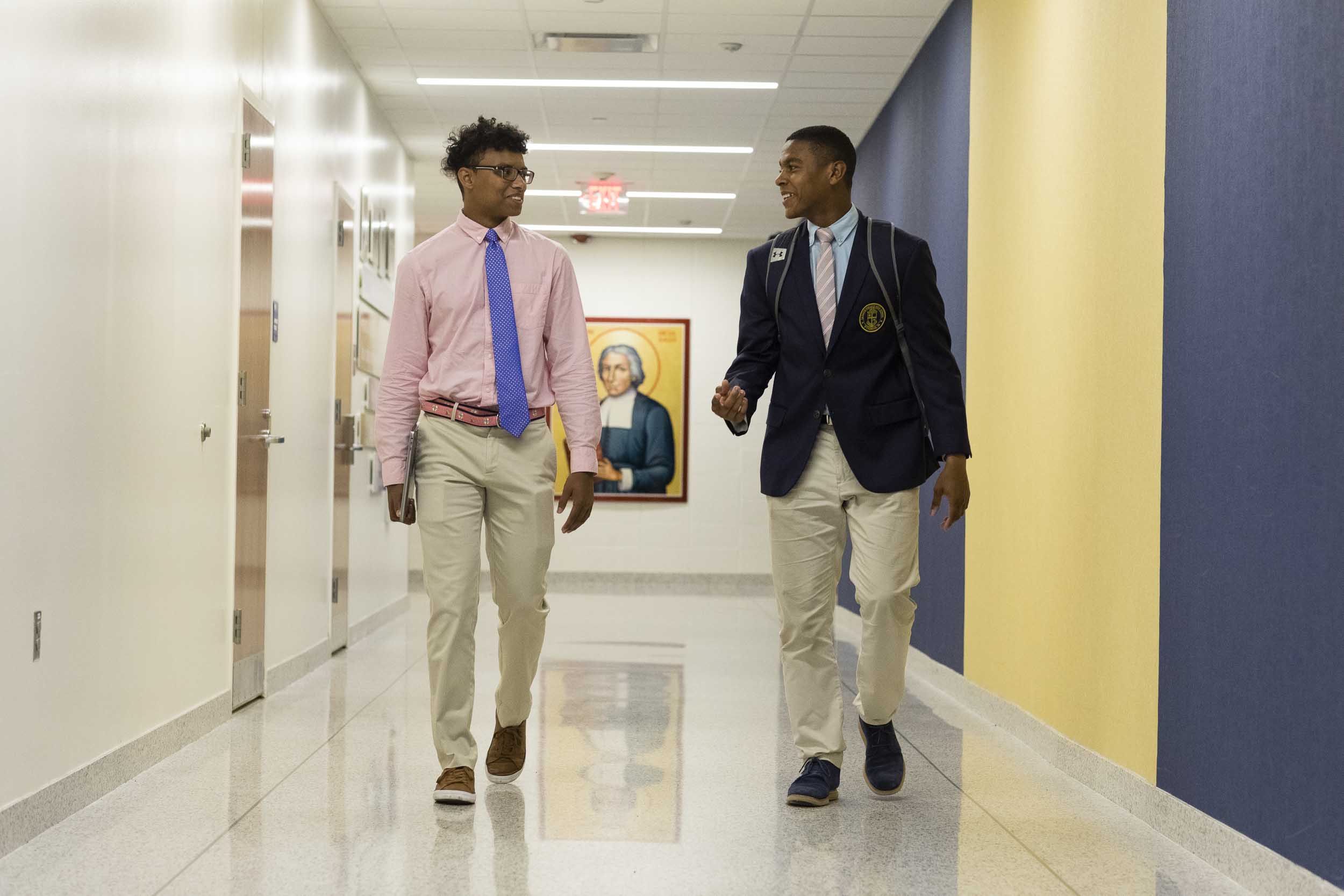 The five goals of Lasallian education.

La Salle College High School graduates live their faith through their actions, recognize the interconnectedness of our world, and act on their obligation to right injustice.

La Salle College High School graduates accept responsibility for their own education and actions and in the spirit of Christian gentleman treat people with respect.

Since 1680 educational institutions in more than 80 countries have been influenced by the vision and innovative spirit of Saint John Baptist de La Salle, the Founder of the Institute of the Brothers of the Christian Schools and the Patron Saint of Teachers. De La Salle transformed education by forming a community of educators with whom he developed a spirituality of teaching and learning, to give a human and Christian education to young people, especially the poor.

Today, the De La Salle Christian Brothers and their Lasallian Partners continue to respond to students through advancements in teaching, technology and scholarship. In Lasallian communities, educators touch hearts, stimulate minds and cultivate leadership to prepare students for life, work, and service to society and the Church.

Since 1858 La Salle College High School has lived out the vision of St. John Baptist De La Salle by providing an education founded on the religious traditions of Roman Catholic Christianity and the rich timeless Lasallian heritage. At La Salle, all faculty and staff strive to embody the core principles of the Lasallian educator: a living faith, a trust in God, a recognition of God’s holy presence in their daily lives, a zeal to participate in God’s saving work of educating youth, a belief in the dignity of all people, and a deep concern for the disadvantaged and the poor.

At La Salle College High School, Catholic values and personal relationships nurture our spiritual formation, fostering the academic preparation, and cultivating the personal growth of the young men. In a warm and caring environment that is built on trust, acceptance, and affirmation of one another, we emphasize a human and Christian education as each student is encouraged to explore his interests, develop his talents, and fulfill his God-given potential.

The De La Salle Christian Brothers and Lasallian Partners at La Salle College High School commit themselves to delivering a rigorous and relevant education. The teaching faculty constantly seek to improve their teaching and the learning experience of young men by adopting appropriate educational advancements and technological innovations. A La Salle education seeks to foster insight, commitment and action on the part of graduates who heed in their lives the call to place their unique talents and skills in the service of other individuals, the community, society, and the Church.

John Baptist de La Salle was born at Reims, France in 1651. He was the first son of wealthy parents and was named Canon of the Reims Cathedral at sixteen. Though he had to assume the administration of family affairs after his parents died, he completed his theological studies and was ordained a priest in 1678. Two years later, he received a doctorate in theology and, began working with a group of rough and barely literate young men in effort to establish schools for poor boys.

At the time, only a few people lived in luxury and most were extremely poor – peasants in the country and slum dwellers in the towns. Only a few could send their children to school, and most children had little hope for the future. Moved by the plight of the poor who seemed so “far from salvation,” he was determined to use his own talents and offer education to children “often left to themselves and badly brought up.” To be more effective, he abandoned his family home, moved in with the teachers, renounced his position as Canon and his wealth, and formed the community that became known as the Brothers of the Christian Schools.His enterprise met opposition from the ecclesiastical authorities who resisted the creation of a new form of religious life – a community of consecrated laymen to conduct gratuitous schools “together and by association.” The educational establishment resented his innovative methods and his insistence on education for all, regardless of whether they could afford to pay. Nevertheless, De La Salle and his Brothers succeeded in creating a network of quality schools throughout France that featured instruction in the vernacular, students grouped according to ability and achievement, integration of religious instruction with secular subjects, well-prepared teachers with a sense of vocation and mission, and the involvement of parents.

In addition, De La Salle pioneered programs for training lay teachers, which included Sunday courses for working young men and one of the first institutions in France for the care of delinquents. Worn out by austerities and exhausting labors, he died early on Good Friday morning 1719 at Saint Yon near Rouen, only weeks before his sixty-eighth birthday.

John Baptist de La Salle was a pioneer in founding training colleges for teachers, reform schools for delinquents, technical schools, and secondary schools for modern languages, arts, and sciences. His work quickly spread through France and, after his death, continued to spread across the globe. In 1900 John Baptist de La Salle was declared a Saint. In 1950, because of his life and inspirational writings, he was made Patron Saint of all those who work in the field of education. John Baptist de La Salle inspired others how to teach and care for young people, how to meet failure and frailty with compassion, how to affirm, strengthen and heal. At the present time there are De La Salle schools in eighty different countries around the globe

The Brothers of the Christian Schools (more popularly known as the De La Salle Christian Brothers) are the largest group of religious laymen in the Catholic Church dedicated exclusively to the ministry of education – God, the Gospel, the Catholic Church, and especially the poor and disadvantaged.

The Brothers of the Christian Schools give themselves to the education of children, young people, and mature students. They are present in eighty-four countries and have more than 1,000 teaching establishments where over one million students are educated. Associated with the Christian Brothers in schools, colleges, and educational centers are lay colleagues, whose aim is to help students achieve a full education as persons, citizens of their country, and believers. The De La Salle Christian Brothers give special attention to missionary countries where young churches exist, particularly in Africa and Asia.

Twenty-three men who gave their lives to the Brother's vocation as Christian educators have been named as Saints or Blessed and the cause of more than 150 others has been introduced for beatification.

Today, the Christian Brothers are in residence at La Salle College High School, and our community is blessed to have these men as mentors for the students and lay faculty.

“To be entrusted with the teaching of the young is a great gift and grace of God.”